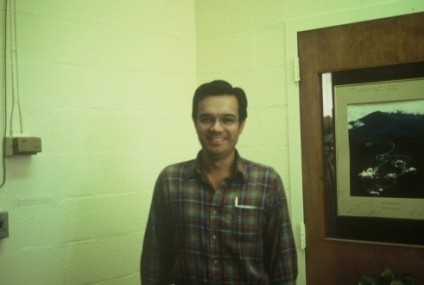 Howe’s first studies were directed toward determining the precision with which timing information could be disseminated in the shortwave radio spectrum. This involved extensive wave analysis and signal and noise modeling.

Two sites containing transmitting and receiving equipment along with precision clocks were located approximately 1000 miles apart; measurements were taken during daylight on 13.56 MHz. His responsibilities involved designing and building equipment specifically for these tests, operating the site near Boulder, gathering and preparing data for further analysis, and investigating more efficient methods of dissemination in this spectrum. These powerful transmissions lasting for a year were received and recorded by many world-wide short wave listeners.  The goal of the testing was to establish a thorough understanding of the F1 and F2 layers of the ionosphere with respect to phase delay and signal distortion. The measurements were very useful in determining the limitations of the currently used WWV time broadcast service.

As a result of the field studies, he undertook the task of implementing an experimental format for WWV. This required extensive knowledge of the capabilities of local frequency standards, the effects introduced by electronic circuitry, the electromagnetic theory associated with given modes of communications, and the variations due to external parameters unique to this spectrum. He was responsible for the design and installation of modulation equipment at the Fort Collins facility to transmit this special broadcast format for field testing. Since he was intimately involved in the project and its day by day progress, it was also necessary that he fully understand the exact scientific basis upon which the project was based. Other areas of physics involved in the work done in this group included the capabilities of modern low and high power solid-state devices and the trade-offs between design parameters and the project goals.

The experimental format included modulation in the single-sideband mode and the design of special high-efficiency class D and class E rf high-power amplifiers. Since this mode had never before been used in these designs, the development of a modulator meeting demanding specifications and generating precise timing information became a fundamental aim of the project. His formal training in radio-physics and wave analysis, and his experience in solid-state electronics and communication and modulation theory were valuable in this effort.

This position required utmost speed and a need to proceed with little or no actual supervision much of the time. His contributions toward the group effort are evidenced by two facts: (1) that he was asked to continue to work until the very last possible moment before returning to college (and to be available in case of difficulty with ongoing experiment); (2) that he received a special cash award for this contribution.

Howe co-developed a device which calibrates VLF tracking receivers using a 1 MHz frequency standard. WWVL and WWVB in Fort Collins transmit coherent, high-powered carriers in the VLF spectrum as a means of disseminating frequency information within the continental U.S. Communication in the VLF band is immune to several ionospheric anomalies which impede successful frequency dissemination in other spectrums. Complex tracking equipment needed to receive VLF transmissions necessitates a close watch of receiver alignment and performance. He developed, along with the project leader, an NIST VLF calibrator. Basically, the calibrator is a synthesizer incorporating features designed to minimize phase instability (short-term jitter less than 8 nanoseconds). The task of building a VLF calibrator meant understanding the limitations of available synthesizer designs (phase-lock oscillator techniques, integrated circuit capabilities, oscillator stress vs. stability), meeting requirements imposed by timekeepers at VLF receiver sites, and designing and building a stable RF source with selectable frequency from 8-100 kHz which, when interfacing a reference standard oscillator and receiver, furnished a quick and accurate evaluation of receiver performance. Several of these units were built and are now being used at key VLF receiver sites throughout the world.

This work dealt with the development of a new time dissemination method using coded information in the vertical retrace interval of the video scan of the standard television format. Primary duties involved researching methods of TV timing to get an optimum system. Howe was engaged in studying future needs of time users, exploring resources and methods of TV time dissemination, applying computer technology and logic design to a wide spectrum of timing problems within the framework of the television method (design solutions were largely a function of cost constraints and system requirements), working with contractors, lab assistants, and other research teams to coordinate activities, and lab and field testing of prototype timing equipment.

Because he had been involved in the television project since its inception, he possess a comprehensive background of such systems. The TV code generator and its companion receiver provide a method of communicating precise time and frequency information by utilizing line 21, a normally unused line in the vertical interval of the television format. Binary-coded-decimal (BCD) messages are transmitted which update receiver clocks and furnish alphanumeric communications; frequency data is transmitted via a 1 MHz coherent signal. The received code provided unambiguous time to 12 hours, with a resolution of 1 nanosecond and long-term stability of 10 nanoseconds for 10-second averaging. To achieve the best results, the complexity of design necessarily approaches even today’s state-of-the-art computer technology.

The proposed NIST TvTime System was met with great acceptance by scientists interested in precise time and frequency synchronization. This interest led to a NIST-sponsored experiment of the active time and frequency code transmitted on the ABC television network, which encompassed nationwide coverage. This experiment presented an opportunity to (1) simulate as closely as possible the proposed layout necessary to accomplish widespread time distribution on a permanent basis; (2) allow evaluation by all interested laboratories with on-the-air signals; (3) determine any detrimental effects on the large population of home TV receivers; (4) more accurately define limitations imposed by typical network-to-affiliate programming (e.g., system would not work with video tape delays without the use of special equipment at the affiliate’s studio); (5) research and optimize the design of all hardware aspects of the system; and (6) make pertinent time and frequency measurements and publish the results.

He was instrumental in the preparation of the equipment for the experiment. I, along with two other lab workers, built and aligned four complete time code generators and eleven high-resolution receiver-decoders. This was a major undertaking; each time code generator and decoder was a very complex instrument containing literally thousands of components, most packaged in integrated circuit “chips.” The decoder designed was much like that of a terminal computer; it was comprised of data shift registers, major and minor divider chains, extensive control circuitry, video synchronizer, and 1-MHz and video phase-locked oscillators.

During this experiment, he traveled a great deal, installing precision decoders throughout the continental U.S. and demonstrating the TvTime System. He was responsible for coordinating data at three principal sites: (1) NIST Boulder Laboratories, (2) Hewlett-Packard, Standards Lab, Santa Clara, California, and (3) KABC, Los Angeles.

After three months of rigorous field study and laboratory analysis, using the best available instruments, he completed a comprehensive technical manuscript in which a large number of aspects of the system valuable to standards labs were documented. The TvTime study required in-depth knowledge of methods of measuring the spectral noise, statistical stability using the Allan variance, and phase vs. time of precision oscillators.

Because of the volume of work that he was able to complete during the nationwide television time and frequency experiment, eh received a special award and cash bonus for his efforts.

ABC network’s chief engineer, Julius Barnathon, saw TvTime as a way to text messages among its affiliates.  We built a texting system for ABC that had the closed messaging capability directly to any TV.  Later, it became the famous “closed captioning system.” In 1977, NIST (then NBS) was given an Emmy for this work.

The TvTime experiments proved the feasibility of communicating extra data via the standard television format, and interesting additional applications began to emerge, most notable the development of captioned television programming for the deaf. Howe’s responsibilities multiplied as our group undertook the task of applying our communications technique to a television captioning system.

He was instrumental in the design and development of a prototype time-frequency-caption encoder which was used in the demonstration on February 15, 1972, in Washington, D.C. The demonstration was sponsored by the Dept. of Health, Education, and Welfare, and was witnessed by many high-ranking officials from the major television networks, the FCC, and the students from Gallaudet College for the Deaf. TV monitors were set up at the college, where the demonstration was held. Caption processing equipment, paper tape reader, and code generator were installed at WMAL, Washington, D.C. he was in charge of all equipment operations aspects of the demonstration. 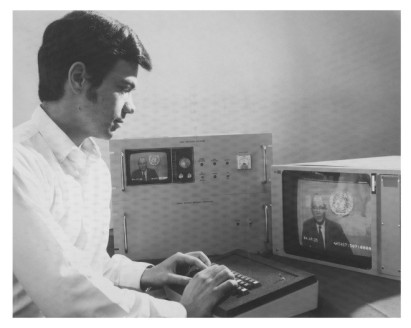 Nov. 1973: Use of the Television Vertical Interval to Broadcast Time for Everyone and Program Captions for Deaf

His work later was in the area of designing and building a prototype caption processor, which could read from magnetic tape, and a unique encoder/decoder unit which could allow captions to be imprinted on movies and films by means of a special FM subcarrier submerged in the audio track. He was again responsible for the complete documentation of circuits and equipment design related to these endeavors.

February 1974: Results in Operation, Research, and Development of Atomic Clocks at the National Bureau of Standards

During the summer of 1972, our group was trying to gain TV industry approval and FCC rulemaking in favor of TvTime and captions. he demonstrated our system in the New York City and Washington, D.C. areas. His tasks ranged from installing and checking equipment to speaking with groups from television manufacturing companies and the networks.

The Public Broadcasting Service (PBS network) continued work on captioning after NIST involvement ceased. The FCC approved rulemaking in 1976 principally to allow captioning for the deaf. Currently, all the major networks offer captioned television programs. On Sept. 6, 1980, NIST was awarded its first EMMY award for this original work. The main contribution was demonstrating that significant additional bandwidth (hidden from TV viewers) for data communications did exist alongside or “underneath” the TV picture.

Efforts to investigate new applications of the TvTime System generated opportunities in the areas of geodetic surveying and automatic vehicle location. The availability of powerful television signals in urban areas makes possible a technique of position determination and navigation by means of a precise time and frequency television code. Automatic Vehicle Monitoring (AVM) is a method whereby fleet vehicles are precisely located in real time and information reported to a central control station. Experiments were set up to measure the effectiveness of the TvTime System applied to AVM. Results were discussed in the paper, “The Feasibility of Applying the Active TvTime System to Automatic Vehicle Location.”

During his employment with the time and frequency dissemination research team, Howe was involved in each and every project effort. Schooling in the field of radio physics provided a strong base for four years of close study and work at NIST in electromagnetic theory and its relationship to time-interval and frequency in rf field studies, multipath and propagation-delay effects, communications, navigation, standards, and precision metrology.
Back To Top